The target iwas £8000 it also includes Foam Salvage and Rescue Equipment.  Stirling Aid donated to this effort . You can still donate to the FBU  partnership  ,  Speak to Zahir or Fire Brigade Union Regional Organiser on 07801047613 ask or Jim Malone.

Stirling Aid is proud to have contributed to the effort. 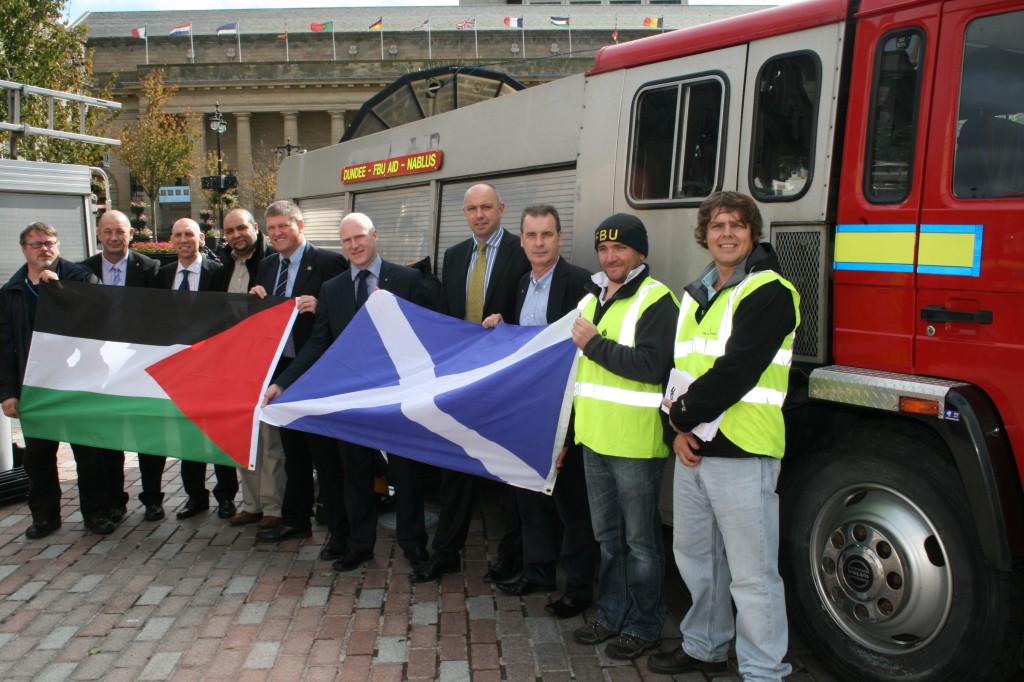 The FBU welcomed today’s news of the release of their humanitarian aid by the Israeli Authorities.

The lifesaving firefighting kit had been detained at the Israeli Port of Haifa since Oct 14th.

At a meeting in the Scottish Parliament, FBU regional organiser Jim Malone praised the support given by politicians, trade unionists and individual donors. He said, ‘today’s news is fantastic, we were faced by many challenges in delivering the project, however with the help of the Israeli Histadrut, the PGFTU and the Nablus Municipality Fire Department we have achieved our goal in delivering this vital equipment’.

At last the equipment has been released from Haifa and transported to Nablus.

Shams Eddin Abu-Ghazaleh of the Nablus Fire Department sent a warm message of thanks and photos of the engine at its new home.

“On Behalf of Nablus Fire Department Chief and all firefighters in Nablus, I would like to thank you one by one for your hard efforts and great support to Nablus Fire Department. This project mean alot for us, that mean we are still in your minds and thoughts, your efforts will be unforgetable, the Scottish Fire Brigades Union officials and members, the Scottish government, the members of Scottish Parliment, Lord Provost of Dundee and all citizens, Tayside Fire Brigades and all supporters and donors.”

We are all very pleased that this project has been completed successfully despite the long distances, beaurocracy and many other challenges faced by the FBU team.

Fire fighters from Dundee and Nablus with Adly Yaish, Mayor of Nablus

The Mayor’s office in Nablus issued a statement about his reception for the fire fighters from Scotland who drove the fire appliances and equipment from Dundee to Nablus.

Mayor Adly Yaish spoke of his appreciation for the efforts of the FBU to bring this equipment to Nablus. He also praised the long-standing twinning between Dundee and Nablus.

One appliance broke down en route and had to be abandoned. All equipment was transferred to the remaining one and continued successfully. However, on arrival at Haifa, the appliance and equipment was impounded. Meanwhile the Israelis apply storage charges which are mounting. Yet they will not release the equipment.

There is no way into Palestine without going through Israeli controls so they have a veto over any aid for Nablus such as this. Let’s hope they can be persuaded to release this equipiment which is much needed in Nablus.

The Fire Brigades Union, with support from Dundee-Nablus Twinning Association are driving two fire engines and lots of equipment to Nablus.

After leaving Dundee, they were given a send-off from the Scottish Parliament on 3rd October. They will take two ferries and a 2,500 mile journey through Europe before reaching Nablus in the Palestinian West Bank.

At a Reception in City Chambers, Dundee, the Lord Provost, John Letford, wished the delivery team of drivers a safe journey. He expressed support for the project as a welcome demonstration of the strong links between Dundee and Nablus.

In a statement, the FBU said: “The links between the FBU and the Palestinian people are rooted in the belief that freedom and justice are a fundamental human right. The Fire Brigades Union project will deliver firefighting equipment to assist our comrades in the Nablus Municipality Fire Department. The visit of the FBU delegation will send a message of hope and support to the Palestinian people.”

The engines drove down from Dundee to the Scottish Parliament in Edinburgh on Monday 3rd October. They were met there by the Cabinet Secretary for Culture and External Affairs, Fiona Hyslop MSP, together with other MSPs. Together with many supporters, the drivers, fire appliances and equipment were given a good send off.

The Fire Brigades Union has raised the funds to buy the fire engines and equipment together with assistance from many other individuals and organisations. They deserve our cheers as they set out on this long drive to meet fellow firefighters in Nablus.

The five Fire Brigade Union (FBU) drivers will be driving all the way from Dundee on Monday 3rd Oct 2011 Nablus. They will deliver two fire appliances plus 150 sets of fire gear, 20 breathing apparatus sets plus cylinders, 150 pairs of fire boots and 100 pairs of gloves.

From Dundee and Edinburgh, the driving team will go via ferry from Newcastle to Amsterdam. They then travel through the Netherlands, Germany, Hungary, Serbia, Macedonia and Greece where they will travel by ship from Athens to Haifa, Israel and on to Palestine. The equipment will be given to the Nablus Municipality Fire Department for their use.

The team will then hope to make their way back via Tel Aviv and Luton to various parts of Scotland.

Check Out the video http://bcove.me/fvtl5fk6