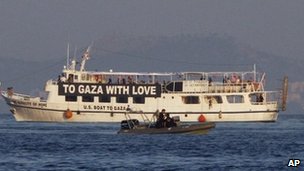 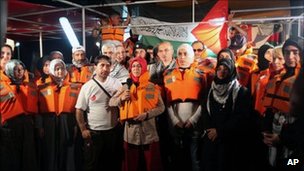 A real Account of what happened on Mavi Marmara.

Kevin Ovenden, a representative of Viva Palestina , was on the main ship of the Freedom Flotilla when Israeli soldiers descended onto the deck – he spoke from Turkey to Siân Ruddick

“We knew the Israelis were going to attack, or intercept us in some way. At 11pm we had the first contact. A visual warning was that two Israeli warships were approaching us, followed by a third.

“We were 90 miles north of the Israeli coast, and 22 miles away from the buffer zone that Israel has set from its shores.

“We had tight organisation procedures in place and people were prepared.

“The captain and the most experienced activists on board said that people should rest. Many people did while others stayed on the look out.

“At 4.25am the attack began. The warship had neared and commandoes were lowering themselves onto the deck from helicopters. There were two motorised dinghies, carrying 14-20 commandoes, on either side of the boat.

“It was clear they were armed – it was the equivalent to an SAS raid. They were all wearing paramilitary style balaclavas.

“The first soldiers landed on the roof of the ship, people responded instinctively with their bare hands and things you would find on a ship – pieces of wood and piping and so on. No sharp objects were used.

Two soldiers were overpowered and pushed below deck. They were disarmed to prevent further injury or death.

“The attack opened with percussion grenades.

“These don’t just make a noise but send shockwaves of heavy vibration. They were trying to create terror and panic.

“They also used rubber coated bullets in the earlier stage. But very quickly they turned to live rounds and we were taking heavy casualties.

“Nikki Enchmarch was on the top deck standing next to a Turkish man who was holding a camera. An Israeli soldier shot him in the middle of the forehead. It blew off the back of his skull and he died.

“I was on the second deck. A man standing a metre in front of me was shot in the leg, the man to the right of me in the abdomen. There was pandemonium and terror.

“The youngest person on the ship was not yet a year old, the eldest 88. The crew included German and Egyptian parliamentarians, NGO workers and representatives from various charities. This is who Israel was targeting.

“While they opened fire we struggled in our defence and to limit the massacre.

“They attacked with lethal force to terrorise the movement for the end of the siege of Gaza and the wider movement of solidarity with Palestine. They used violence to instill terror for political ends. This is the definition of terrorism.

“But they failed. The people aboard, their families and the people who donated to the €20 million aid, are not afraid – neither are those in the wider movement.

“This must become a turning point in the lifting of the siege and an end to the policies pursued by governments in relation to Israel.

“Israel has completely isolated itself. Around the world we must redouble our efforts and commit to action to end the siege. This is a political opportunity in which big advances can be made.

“The statements of condemnation by David Cameron and William Hague betray how isolated Israel is. These are leaders of a pro-Israeli party, and yet these statements have been more damning than anything Gordon Brown said when Israel was bombing Gaza in December 2008 and January 2009.

“Governments claim to recognize the siege is unsustainable. We have to force the UN, the EU and all the other governments to turn their words of condemnation into action.”