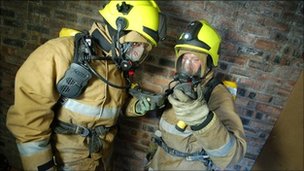 Rescue equipment including breathing apparatus has also been sent to Nablus

A team of Scottish firefighters have left on a 2,500 mile journey to deliver two fire engines to Palestinians on the West Bank.

The engines, which have been retired from service, have been bought by the Fire Brigades Union and will be given to the fire department in Nablus.

The five firefighters started their drive in Dundee, which is twinned with the West Bank city.

Helmets, boots and breathing apparatus have also been donated.

The engines left Dundee at 07:00, briefly stopping at the Scottish Parliament before continuing south on the two-week journey.

Sandra White, convener of the Scottish Parliament’s cross party group on Palestine, said: “These engines will bring enormous benefit to the people of Nablus and the West Bank.

“There are still extremely limited resources and equipment in Palestine and the generosity of the FBU [Fire Brigades Union] in fundraising, buying and taking this material to Palestine will be welcomed.”