This is a transcipt of the article..

A Stirling-based campaign which is providing food to some of the most vulnerable communities is hoping to go from strength to strength in 2021.

Businessman Zahir Haider has been behind the Stirling Aid charity since it started up in 2009, with the group getting involved in charitable efforts across the globe.

The charity’s efforts to help saw it launch an effort to provide additional PPE for NHS and care staff during the early stages of the pandemic.

But as the months have ticked over, the focus has shifted on to a new effort to provide foodbanks and community collections with leftover stocks from supermarkets based both across the region and outside.

Zahir has been putting in the miles every night in his van to organise the collections and drop-offs, as well as attempting to reach as many in-need groups as possible.

He told the Observer: “It’s been an incredible journey from the beginning of the pandemic with the PPE stuff to where we are now dropping off excess food to homeless and community teams in Stirling and Glasgow.

“I’ve been heading out seven days a week between nine o’clock and midnight and getting everything to the charities in time for them opening back up at nine the next morning.

“We’re trying to get another van and we are also desperate to find some sort of premises for the future because that will allow us to reach and support more people – our current van is too small at the moment and we’re having to go back for a second delivery for every pick-up.“We’re only picking up about 10 per cent of the food that is going to waste within our area, so if we could get into the routine of picking up food and taking it to a central depot to distribute, then we could eradicate a lot of the queues for services at foodbanks and charities.

“It is a really tall order but it is doable and I’ve always tried to make things work.”

The group is hoping to secure a new van, with the current one too small for all of the deliveries they are making
RELATED ARTICLES

‘We cannot walk away from this’: Christmas soup kitchen to continuedailyrecord
The collection effort has supported local groups including the Salvation Army in Stirling and Plean Foodbank with much-needed provisions, in addition to causes close to Zahir’s heart based in some of Glasgow’s poorest areas.

But the impact of the pandemic has hit particularly hard, with the growing requests for help coinciding with coronavirus issues shutting down Zahir’s personal efforts for most of last month.

He added: “My daughter who works in the NHS tested positive on December 2 so I was in isolation for 10 days and didn’t feel anything and then on day 11, it just hit me like a ton of bricks and that was me out for another 12 days or so.

“I also had a family emergency which meant that I only really got back on the road on January 3, so the volunteers had to cover me for that period and it actually might have been a bit of a blessing because I’ve been out every night doing the collections and deliveries. 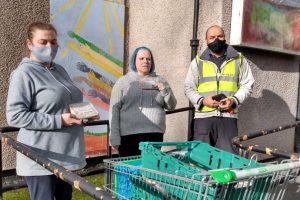 Powered by
“The demand during this pandemic is increasing and we all need to make sure that everyone who needs that support can get it.

“Everything that we deliver to these places goes out and some of these groups are quite reliant on my donations so that’s why I want to keep doing it and why we flipped over from PPE to food.

“It was a case of needs must and we didn’t want to let these people down.”